Following the release of the H1’2017 results by insurance firms, we have carried out an analysis on Kenya’s listed insurance companies to decipher any material changes from our FY’2016 Insurance Report. In our analysis of the insurance sector, we seek to give a view on which insurance firms are the most attractive and stable for investment from a franchise value and a future growth opportunity perspective. The report is themed "Sustaining Profitability in an Era of Heightened Regulation", as the insurance sector still struggles in the local market with low penetration levels, excessive duplication of products and increased capital requirements following full adoption of a risk based capital adequacy framework, as a result of the Insurance (Amendment) Act 2016.

The Kenyan economy has experienced stable growth expanding by 5.0% in Q2’2017, higher than Q1’2017 growth of 4.7%, with the Financial Services sector contributing 6.0% to Kenya’s GDP as at Q2’2017, slightly lower than the 6.1% recorded in Q2’2016. The slowdown is attributable to a slowdown in private sector credit growth and reduced profit margins in the banking sector, following the capping of interest rates, and thus the insurance sector will be key to support contribution of the financial services to Kenya’s economic growth.

The insurance sector has benefited from (i) convenience and efficiency through adoption of alternative channels for both distribution and premium collection such as Bancassurance and improved agency networks, (ii) advancement in technology and innovation making it possible to make premium payments through mobile phones, and (iii) a growing middle class, which has led to increased disposable income, thereby increasing demand for insurance products and services. These factors have been key in driving growth of the sector despite reduced profitability and are set to continue going forward.

On valuations, insurance companies are trading at a price to book of 1.1x compared to the banking sector at 1.3x, which are below historical averages of 1.4x for the insurance sector, and 1.8x for the banking sector. This indicates that both sectors are attractive for long-term investors supported by the strong economic fundamentals and favourable investment environment.

Following the stable growth achieved by the insurance sector over the last decade, we expect the sector to transition into a more stable sector. This transition will enhance the capacity of the sector to sustain profitability, amidst the heightened regulation. The Insurance Regulatory Authority (IRA) has been at the forefront of this initiative, pushing for (i) the observance of prudential guidelines, (ii) better corporate governance of insurance companies, (iii) increased transparency in reporting of results, and (iv) adoption of a risk-based approach to capitalization, with varying risk charges on respective investment options. As indicated in our H1’2017 Insurance Report, the key areas of focus in the sector include the following;

The graph below highlights the rising levels of inefficiencies in the sector since 2014, which the firms operating in the sector need to cap to steer growth and sustain profitability; 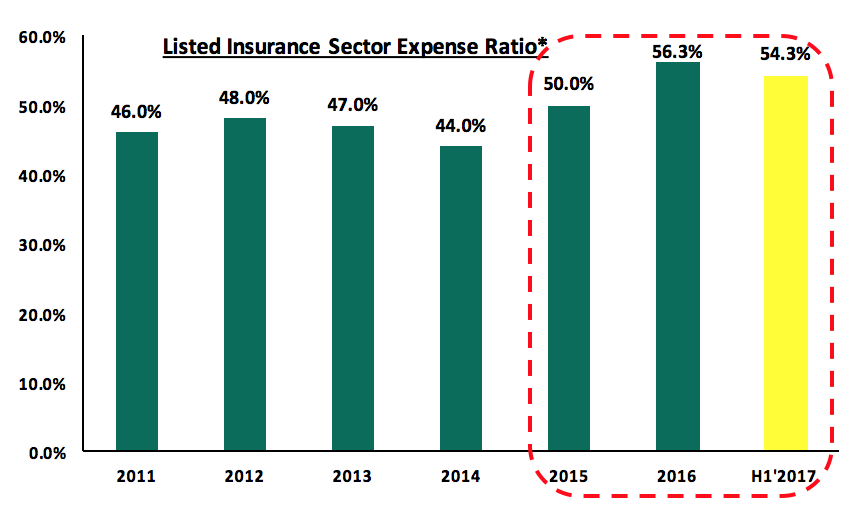 The listed insurance sector expense ratio is more than 50%, indicating more than half of insurance company revenues are used up in administration and distribution expenses, and with loss ratios above 50%, insurance companies are struggling to eke out a profit from their core business.

Based on the above, we expect increased product innovation and operational efficiency in the sector to drive sustained profitability and thus stability of the sector amidst the heightened regulation.

Below are some operating metrics for listed insurance companies in Kenya as at H1’2017.

Key take outs from the table above include:

Based on the Cytonn H1’2017 Insurance Report, we ranked insurance firms from a franchise value and from a future growth opportunity perspective with the former getting a weight of 40% and the latter a weight of 60%. The ranking is as follows;

The key take-outs from the ranking were;

For more details on the ranking, see our H1’2017 Insurance Report.

The sector continues to undergo transition mainly on the regulation front, which is critical for stability and sustainability of a conducive business environment for one of the key sectors of Kenya’s economy. We are of the view that insurance companies have a lot they can do in order to register considerable growth and improve the level of penetration in the country to the continental average of 3.5%, namely: