There has been a lot of discussion on whether Kenya as a country is able to sustain the current debt levels and as to whether the economy has the capacity to service the outstanding government debt. This week, we seek to look at the status of the debt level and what this means for the economy.

Over the years, we have seen the national budget continue to grow with the total expenditures growing at an average of 15.4% to Kshs 2.0 tn in 2015/16 from 977.0 bn in 2010/11, while revenue growth (KRA Tax collections) has increased by 14.2% to Kshs 1.3 tn in 2015/16 from Kshs 670.0 bn in 2010/11 meaning that the difference has been funded through borrowing. This has led to an increase in the debt level from 40.7% debt to GDP in 2011 to the current level of 50.3%. According to the IMF, the target debt to GDP for developing countries should be at or below 50%, meaning that the current debt level in the country has surpassed the standard set by the global lender, and this may pose fiscal challenges if mechanisms are not put in place to improve on Kenyas fiscal and public finance management framework.

Below is a chart showing the evolution of the debt to GDP over the years: 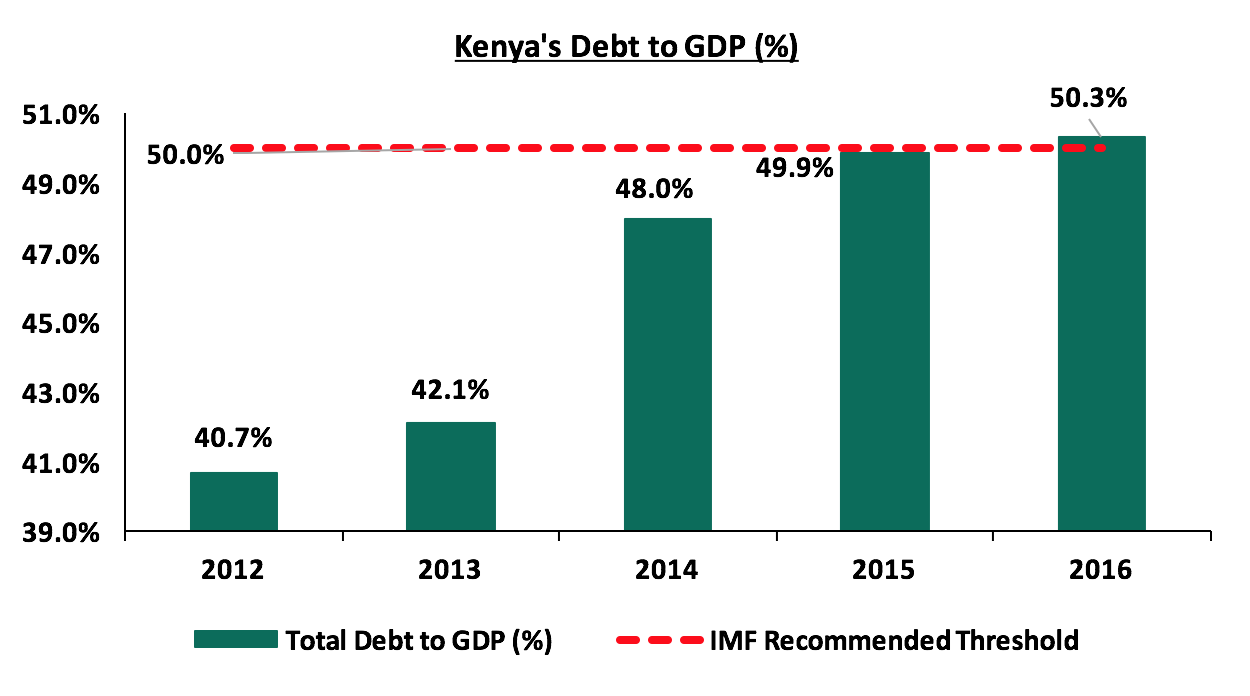 There are two avenues that the government can use for borrowing, either from the domestic markets through issuance of treasury bills and bonds, or can seek to borrow from the international markets through direct government-to-government negotiations or from the international capital markets through the issuance of sovereign bonds/Eurobonds. Raising funds from the domestic market is much easier and faster and there is already a defined time table for this i.e. weekly through treasury bills and monthly through treasury bonds and for this, the Central Bank acts as the borrowing agent of the Treasury. Local borrowing is also advantageous as it is faster and simple to administrate, but the main issue is that government competes with the private sector for funds from banks which leads to crowding out of private sector and slowdown in economic growth as the contribution by the private sector to economic growth reduces. On the foreign borrowing, though it gives the government another borrowing avenue apart from the domestic market, the challenge is that it opens up the country to trends in the global market, which may destabilise the economy in times of global crisis.

According to the Central Bank of Kenya, the country debt mix currently stands at 50:50 for external and domestic debt at Kshs 1.8 tn each, bringing the total debt to Kshs 3.6 tn. The bulk of the governments foreign borrowings is through bilateral agreements as only Kshs 270.0 bn was issued in the 5 and 10 year Eurobonds. From the last budget the split in the local and foreign borrowing was at 42.6% and 56.9%, respectively and this has now been revised as per the Budget outlook paper to 49.4% and 50.6%, respectively. With no funds having been raised from the international markets yet, we might see a lot of reliance on domestic borrowing. If the government is to raise funds from the international markets, the rates might also be high given that the country is headed into an election year, and investors could price in additional risks.

Below is a summary of the growth of the debt: 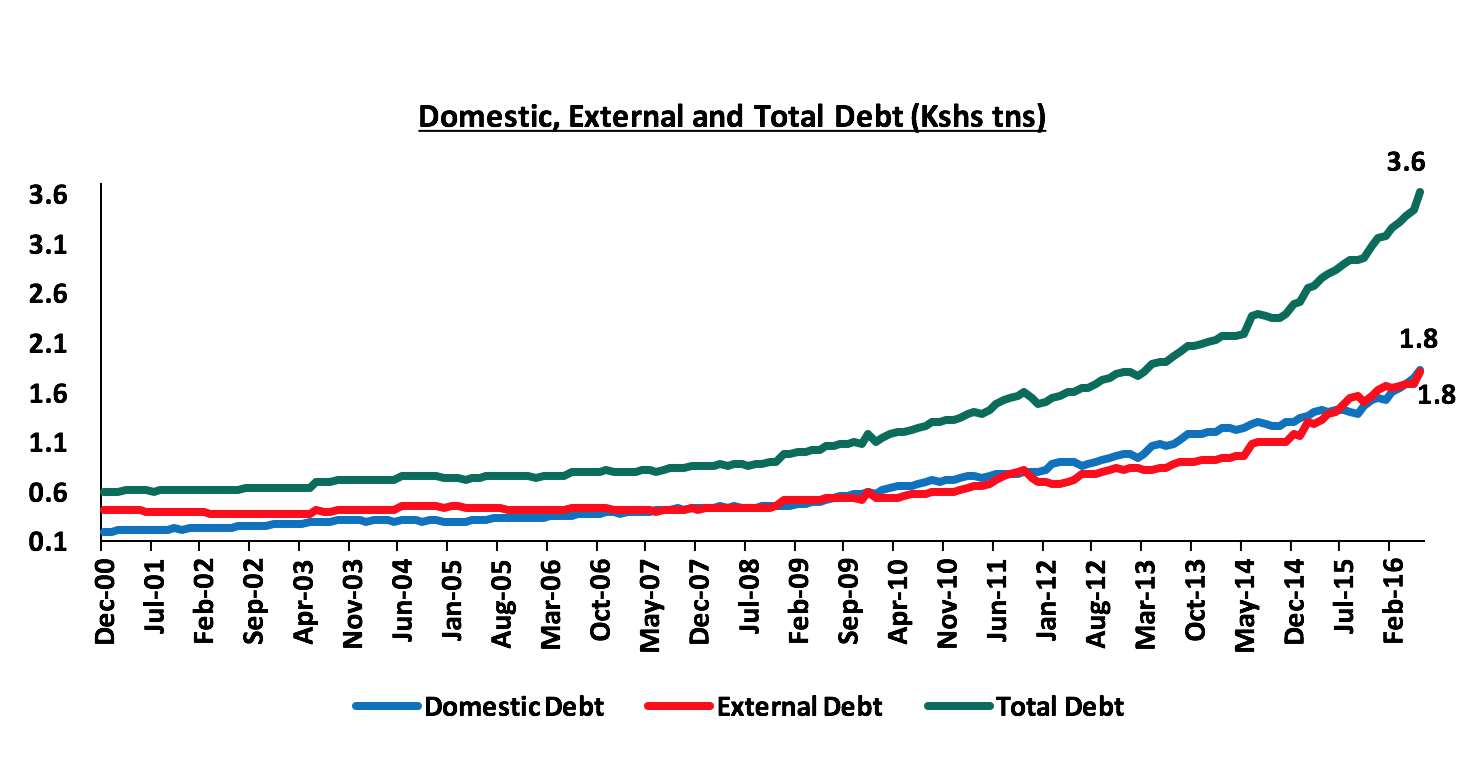 The ability to service debt is key and is usually measured by revenue collection to total outstanding payments required, both in principal and interest payment. The government at times borrows to pay off their debt but usually ability to pay off the debt with revenue collections would be ideal. For the current fiscal year, the total allocation to debt servicing was Kshs 250.0 bn and has increased from Kshs 173.3 bn in 2011, a growth rate of 44.3% over the last five years. According to a report on Division of Revenue Bill by the Treasury, the government is expected to utilize 40.0% of tax revenue collection for debt repayments in 2017, up from 32.0% in the current fiscal year 2016/17. 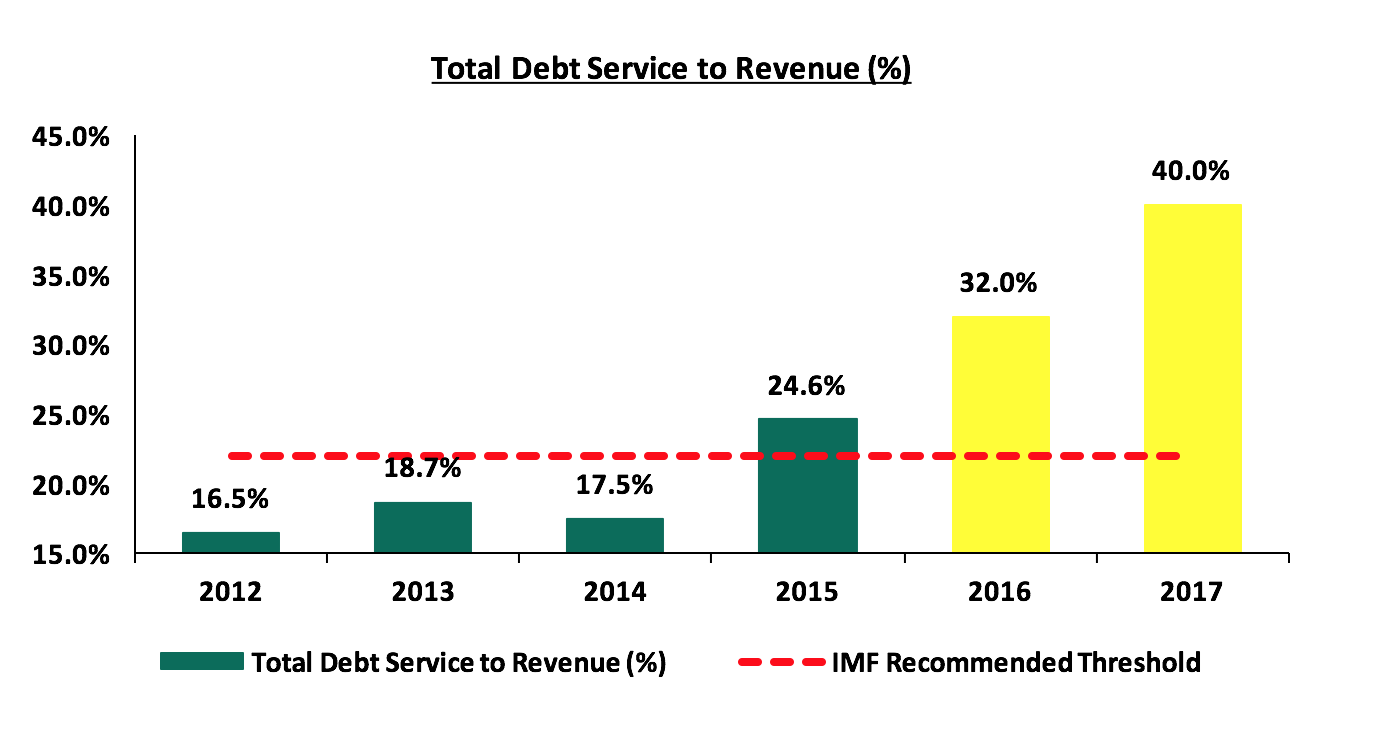 Looking at the current debt levels, the main issue is that if the current trend continues, the economy is likely to face fiscal challenges which may further affect negatively Kenyas credit ratings in the international market. In order to address this, we need first to look at the factors that has led to the acceleration in government borrowing over the last three years;

In conclusion, Kenya currently lies within the safer bounds on debt levels. However, going forward, there are risks associated with the changing funding patterns that could see the debt levels continue to rise. As per our topical on Kenyas debt levels: Are we on a sustainable path?, we still maintain our view that in order to reduce our debt levels, in line with the IMF sustainable levels, the government should consider to achieve: (i) enhanced tax revenue collection growth, (ii) involve private sector in development through Public-Private Partnerships (PPPs), (iii) reduce recurrent expenditure and improve on development budget absorption rates, and (iv) come up with innovative products like diaspora targeted bonds. The international markets borrowings should be handled with care as too much borrowing or reliance on global markets opens up the country to international economic trends which could be bad for the economy. It is imperative that we be cautious on borrowing if we are to achieve the long term economic stability.

----------------------
Disclaimer: The views expressed in this publication, are those of the writers where particulars are not warranted. This publication, which is in compliance with Section 2 of the Capital Markets Authority Act Cap 485A, is meant for general information only, and is not a warranty, representation, advice or solicitation of any nature. Readers are advised in all circumstances to seek the advice of a registered investment advisor.