In our report last week focusing on Kenyas economic growth, we noted Kenyas economy is positioned for impressive growth and stands out in East Africa due to its economic diversity and vibrancy as it is the regional hub for innovation, technology, financial services and real estate development.

This week, the World Bank released the Doing Business 2017 report. As highlighted in our Cytonn weekly report #32 (2015), the report is significant since it offers governments and policy makers a benchmarking tool useful in policy formulation to improve economys business regulatory environment as it highlights potential challenges and provides insight into good practices worldwide. Additionally, it is used by international investors as a guide to which countries have more favorable operating environments.

Ease of Doing Business is an aggregate ranking method for countries, based on indicators that measure and benchmark regulations applying to domestic SME businesses throughout their life cycle. The ranking is done by the World Bank, and tracks changes in the following 10 life cycle stages of a business: (i) starting a business, (ii) dealing with construction permits, (iii) getting electricity, (iv) registering property, (v) getting credit, (vi) protecting minority investors, (vii) paying taxes, (viii) trading across borders, (ix) enforcing contracts and (x) resolving insolvency. The results for each economy are then compared with those of 189 other economies and over time.

In 2015/2016, 137 economies implemented a total of 283 reforms across different areas with starting a business being the most common reform area followed by paying taxes. Kenya was among 10 economies highlighted this year for making the biggest improvements in their business regulations recording an improvement of 16 places to rank position 92 out of 190, which is a build-up from last years improvement of 28 places to position 108 from 136 in 2015. In this report, we highlight five key areas where Kenya has made significant improvement and actions that need to be taken to further improve Kenyas overall rank going forward.

The five areas where Kenya has made significant improvements include;

Despite the general improvement in rank, Kenya also declined in a few business life cycle stages, that offer room for improvement and provide basis for formulation of positive reforms going forward. These areas include:

Evident from the key areas highlighted above, there exists room for Kenya to improve its business climate to attract more entrepreneurs and investors to start businesses and foreign direct investment. This can be achieved by;

Kenyas Ease of Doing Business ranking over the last decade is now improving after significant deterioration as shown below; 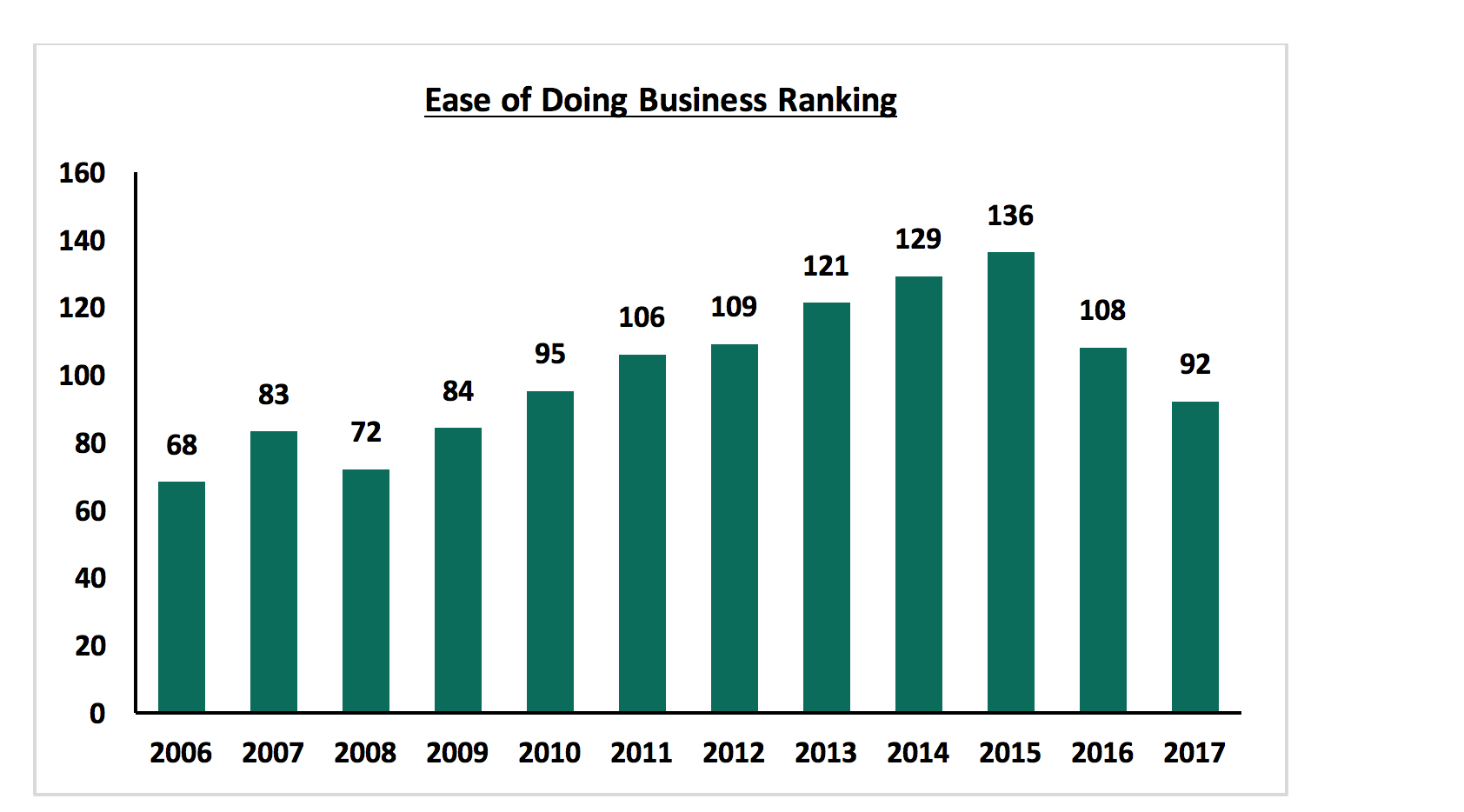 As seen from the graph above, Kenya has greatly improved its ranking from last year, however the country still has a lot to do to reclaim its peak 2006 rank of 68. To improve in the ranking requires partnership between the government and the private sector to create a conducive business environment. Implementing effective business regulations will encourage entrepreneurial activities and ensure that all participants have fair and equal opportunities to participate in a competitive market. This will in turn attract more business investment into the county and spur economic growth, which ultimately creates jobs and improves the standard of living for Kenyans.

Disclaimer: The views expressed in this publication, are those of the writers where particulars are not warranted. This publication, which is in compliance with Section 2 of the Capital Markets Authority Act Cap 485A, is meant for general information only, and is not a warranty, representation, advice or solicitation of any nature. Readers are advised in all circumstances to seek the advice of a registered investment advisor.