In our previous weeklies, we have discussed about the state of the Kenyan economy, delving into interest rates, performance of the Kenya shilling and the overall impact on economic growth. We also examined the financing avenues that the Treasury has undertaken to fund the budget. This week, given that the budget shall be read in a weeks time, we focus on the level of debt in Kenya.

We examine the key factors driving the debt levels, the impact of the debt levels to the economy. We shall review what is considered sustainable levels and close out on the expectation going forward. Kenya, historically has evolved from a system of donor and bilateral-based lending structures to a much more commercial funding like the Eurobond issuance. We shall also look at the levels of both domestic and external debt.

The level of government debt has continued to increase from the early 2000. As at December 2016, Kenyas total debt stood at Kshs 3.2 tn compared to Kshs 0.6 tn in December 2000. The composition of the debt is both domestic and also external with the external debt increasing more recently. 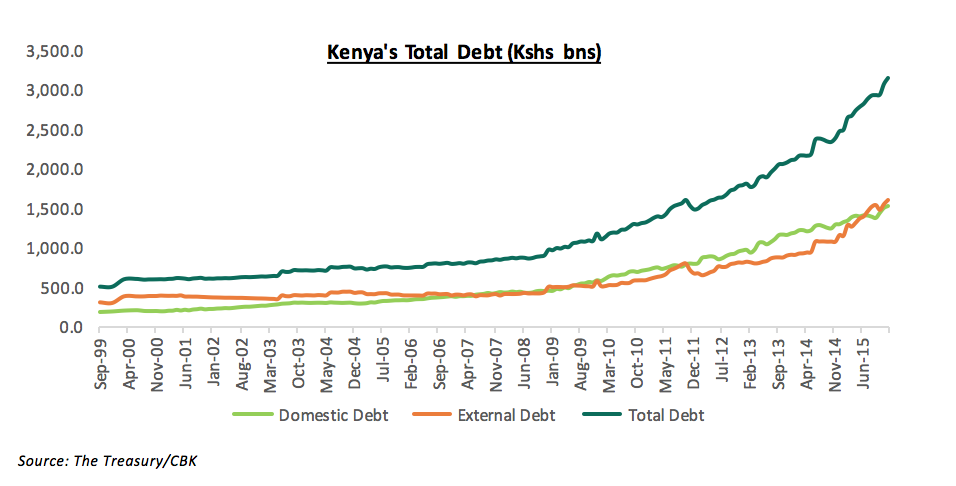 The main factors driving the rise in debt levels in Kenya include:

Domestic borrowing consists of debt raised by the government from the local market primarily through auction of bonds and treasury bills. Domestic borrowing currently constitutes 48.8% of the total borrowing, with the portion increasing in tandem to the increase in the size of the budget. The Kenya Treasury bills market is one of the most developed markets in the region with bonds tenors straddling from 2 years all the way to 30 years at the time of issue. The capital markets have benefitted enormously from this and now the total value of bonds listed on the Nairobi securities exchange stands at Kshs 1.2 tn with an average monthly turnover of Kshs 34 bn over the last 5 years. Local borrowing offers a much convenient avenue for raising funds by the government. The government has continued to come in and borrow a lot from the market and given the growth of the institutional investors base, i.e. pension schemes, insurance companies, banks etc., the borrowing has been of great success. There are however risks to this as the government has tended to borrow much at higher rates hence depriving credit to the private sectors as the returns from the government securities are great on a risk adjusted basis. The more aggressive the government is in borrowing locally, the greater the pressure on interest rates. As highlighted in our Cytonn Weekly #42, the aggressive local borrowing by the government has been the main factor behind the surge in interest rate environment in 2015.

On foreign borrowing, the government has pursued several means to fill this basket, currently accounting for 51.2% of the total debt. Through syndicated facilities, Eurobond(s) and direct bilateral/concessional loans, the government has been able to raise funds year on year to support its expenditure. Whereas some of these funds come priced at much more favorable rates compared to domestic borrowing, and could have other fringe gains like trade expansion, they pose risks performance of the local currency. Increased foreign debt obligations, increases the level of repayments, which have a rundown effect on the currency as there is increased demand for forex to repay the debt.

Usually like any person, borrowing for investments is usually a great thing as there are ways to amplify the returns. The repayment cash flows could be a strain especially if there is a mismatch of the investment and the debt, however, this can be structured around in most cases. In Kenya, the investment in infrastructure has been great as it has supported trade, both in the country and in the region and hence has been good for economic growth. However, key to note is that the absorption rates in the previous budgets have been low for development expenditure and the worry is that some of the borrowing meant for development could have been used for recurrent expenditure which has continued to grow though at lower rate.

According to the IMF, the sustainable debt levels for the emerging market is 50% to GDP. Kenya currently stands at 52.0%, indicating that we have surpassed the average target. With this high exposure we could be forced to pay a premium if we are to borrow money from the international markets. However, its important to note that Kenyas current debt levels have risen much faster and crossed the sustainable target within the fiscal year 2015/2016, from 41.8% in 2014/2015. The growth has been driven majorly by the external borrowing window, where the government has progressively raised from the global markets. Of importance to note is that commercial external debt has grown significantly, highlighting the overall attractiveness of the said debt in the global market. Kenya has also continued to enjoy the support of international multilateral lenders, including the IMF, who recently extended their standby credit facility to Kenya.

So, how do we maintain, if not reduce our debt levels, in line with the IMF sustainable levels? There are a myriad of factors and steps the government could consider to achieve this:

In conclusion, Kenya currently lies with the safer bounds on debt levels. However, going forward, there are risks associated with the changing funding patterns that could see the debt levels rise. The international markets borrowings should be handled with care as too much borrowings or reliance on global markets opens up the country to international economic happenings which could be bad for the economy. It is imperative that we be cautious on borrowings if we are to achieve the long term economic stability.

Disclaimer: The views expressed in this publication, are those of the writers where particulars are not warranted- as the facts may change from time to time. This publication is meant for general information only, and is not a warranty, representation or solicitation for any product that may be on offer. Readers are thereby advised in all circumstances, to seek the advice of an independent financial advisor to advise them of the suitability of any financial product for their investment purposes