Over the last few years, Kenya’s rising public debt has been a point of discussion in most macroeconomic outlook discussions, with organizations such as the World Bank, the International Monetary Fund (IMF), global credit rating agencies (Moody’s Credit Rating Agency, S&P Global Ratings, and Fitch Ratings) and the African Development Bank (AfDB), among others, raising concerns. Most recently, on 14th February 2018, Moody’s downgraded the government’s issuer rating to “B2” from “B1” previously, based on the observation that as the country’s financing needs continue to grow and the government turns to external commercial loans to fund the deficit, more pressure is likely to mount on the government’s liquidity and therefore ability to repay arising liabilities in good time. The credit rating agency however retained a “stable” outlook supported by Kenya’s strong and relatively diversified economy. The National Treasury however refuted the rating, claiming the analysis was not well informed. In totality, concerns have centred around the following areas:

We have previously written about our concerns on Kenya’s debt in the below publications:

This week, we seek to take a view on whether the rising debt levels should be a point of concern. We start by analyzing Kenya’s current debt profile and an outlook on the same, and then look at a few case studies of countries that have been through the same scrutiny. We finally conclude with an analysis of 5 metrics highlighting whether we should be worried, and give our recommendations on how Kenya can reduce its debt exposure.

The rising government debt has been driven by:

The ideal debt mix for any given country would contain more of domestic debt as international markets borrowings should be handled with caution since too much borrowing or reliance on global markets opens up the country to international economic trends, which could negatively affect the economy due to exogenous shocks. It is imperative that we be cautious on external borrowing if we are to achieve long term economic stability. Kenya’s external to domestic government debt mix stood at 52:48 as at November 2017, a huge improvement from 66:34 in June 2000, but a drop from 43:57 in March 2012 as indicated in the chart below: 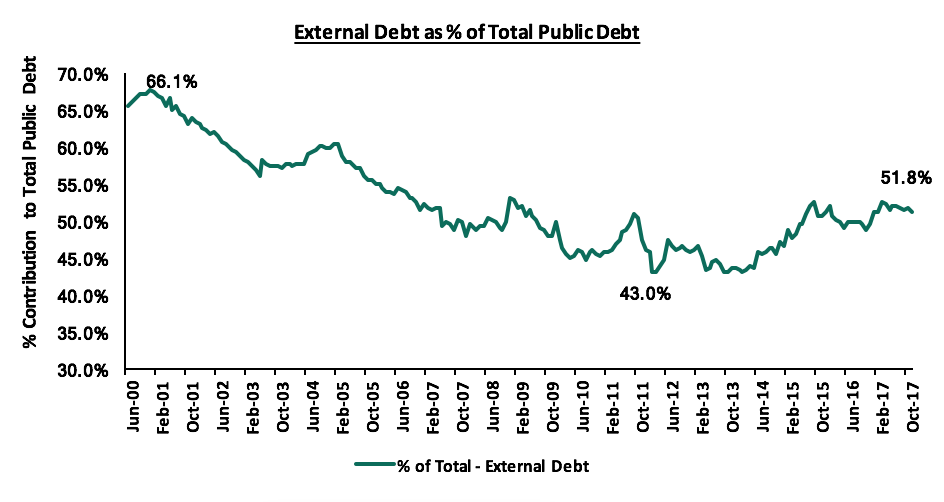 While too much debt in general is detrimental to a country’s ability to repay, external debt is of more concern as it is exposed to external as well as internal risks. Due to this, we decided to take a closer look at the composition of Kenya’s external debt. First is to understand the two types of loans: Concessional loans are those extended at more favourable rates than market rates and are extended by non-profit organisations such as the IMF, African Development Bank and Fund(ADB & ADF) e.t.c., compared to non-concessional loans, which are agreed at commercial terms, with all market and country risk premiums fully factored in. An ideal mix would be to have more of concessional debt, as non-concessional debt is likely to negatively affect the economy as the foreign financing from commercial banks is relatively expensive, which would then lead to an increase in Kenya’s public debt service, meaning a higher percentage of the country’s revenue collections would go towards interest payments as opposed to development expenditure. Looking at Kenya’s external debt profile in respect to this, we note that:

This is illustrated in the chart below: 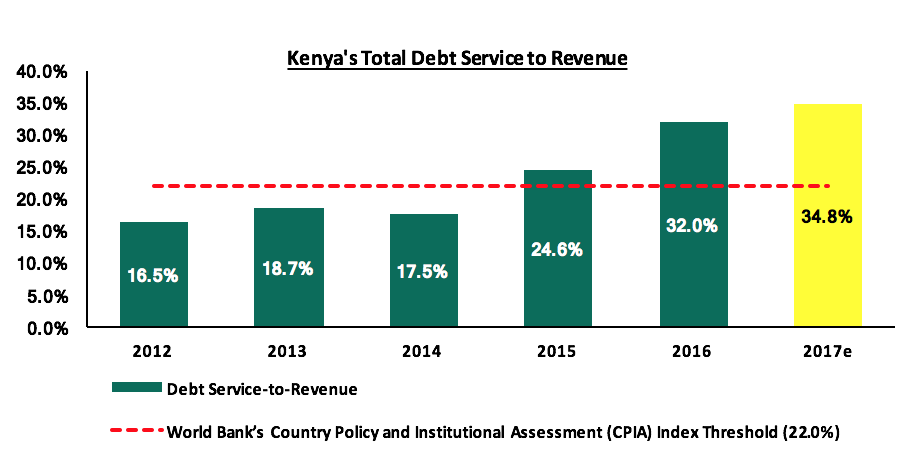 *2017 estimates assumed a GDP growth rate of 4.7% as per Cytonn Projection and a population growth rate of 2.6% as per the World Bank 2016 Estimate. Total Public Debt is as of November 2017

While some might argue that the borrowed funds are channelled towards development spending, on projects that are expected to eventually pay off by sparking faster economic growth, we have not seen the increase in public debt to GDP resulting in increased GDP growth yet as indicated in the chart below. With the 2017 expected public debt to GDP at its highest, GDP growth is expected to hit its 2nd lowest point in 8-years:

Looking at the Sub-Saharan Africa economies that are expected to drive growth in 2017 and 2018, (i) Ethiopia has managed to maintain higher growth rates despite rising debt levels, while (ii) Ghana experienced its lowest GDP growth rates from 2014 to 2016 when its public debt to GDP ratio was at its highest, leading to intervention by the IMF. Ghana’s public debt situation is currently being looked at as a possible crisis caused by plummeting global commodity prices and their over-reliance on commodities, and public funds being placed in projects that have not ensured the borrowed money can be paid out in time. Mozambique on the other hand is in an actual crisis after defaulting on debt payments and its debt-to-GDP ratio hitting 113.6% in 2016 with Kenya still at 52.6% in the same period. We shall therefore look at the case of Ghana and Mozambique, focusing on events leading to the intervention by the IMF and the debt crisis, respectively.

The Case of Ghana

Ghana’s risk of debt crisis stemmed from a gradual but steady rise in public borrowing on the back of oil discovery and thriving of global commodity prices, seeing as Ghana is commodity-dependent, big on cocoa and gold exports; the 3 (oil, cocoa and gold) currently contribute to over 80.0% of exports. Following the beginning of the decline of commodity prices in 2013 coupled with a depreciating Cedi against the USD, Ghana continued to borrow to deal with this. Failure to invest amounts borrowed in projects that would yield economic returns and unwise debt management, featuring increased non-concessional borrowing, resulted in the historical high debt to GDP ratio of 73.4% recorded in 2016. The IMF and World Bank’s joint Debt Sustainability Assessment of Ghana rated the debt distress level at moderate from May 2007 to February 2015. From March 2015, this was bumped up to high risk following an increase of the debt-to-GDP ratio to 70.2% in 2014 and a sharp decline in GDP growth to 4.0% as (i) global commodity prices remained low, and (ii) Ghana’s focus on commodities had resulted in a negligence of the manufacturing sector whose contribution to GDP declined to 5.0% in 2014 from 10.0% in 2006. This is illustrated in the chart below:

The Ghanaian Government got to a point where it was borrowing mainly to pay back maturing debt instruments and plug in the deficit arising from dismal revenue collection in 2013. During this period, the Cedi depreciated by 92.6% against the USD. The IMF stepped in to bail out lenders in April 2015 through concessional loans, and by introducing reforms that had to be adopted by the government such as reduction of government expenditure and increases in tax rates to boost revenue collected and reduce the budget deficit. With these measures in place, the budget deficit is expected to reduce to about 4.5% of GDP by 2018, from 6.5% as per their 2018 Budget Statement, effectively reducing annual borrowing and the government debt-to-GDP ratio below the 50.0% threshold, but Ghana still remains a country in high risk of debt distress.

Kenya can take the following lessons from Ghana’s situation up until the point of IMF intervention:

The Case of Mozambique

Mozambique’s debt crisis is more often referred to as a debt scandal given the events that led up to a tailspin of defaults. It all begun in 2013 when USD 2.0 bn in government-guaranteed debt was raised for fishing and maritime security projects, arranged by Switzerland’s Credit Suisse and Russia’s VTB Capital and channelled to 3 Mozambican companies i.e. EMATUM (Mozambique Tuna Company), ProIndicus and MAM (Mozambique Asset Management). April 2016 saw the uncovering of about USD 1.4 bn worth of government debt that had not been declared, leading to the IMF withholding the loan programme, and the Metical depreciating by 34.5% against the USD by the end of the year; an occurrence that would serve to make the payment of external debt more expensive. Other prospective donors grew skeptical following the IMF’s action and halted any ongoing budgetary support discussions. Come mid-January 2017, the government defaulted on an interest payment worth USD 60.0 mn, launching an audit of the country’s public external debt by Kroll, a multinational risk management firm, in a bid to hold all those involved in the fraudulent deal accountable. The results of the audit revealed how the loans were issued and discrepancies in asset value but failed to reveal how loan proceeds were utilized by the three companies. For the IMF and other lenders to resume lending to Mozambique, it was recommended that the country introduce strong policies to enhance transparency and accountability going forward. By the end of 2016, the public debt-to-GDP ratio had hit 113.6%, GDP growth had fallen by almost half to 3.8%, inflation rose to 19.2%, above the government set target of 5.0% - 6.0%, and investors demanded higher yields for shorter term papers as they priced in the risk of default, with the 3-month T-bill yielding 12.9% while the 5-year T-bond was at 8.0%.

Kenya can take a few lessons from the circumstances that led to Mozambique’s debt crisis, which include:

According to the Draft 2018 Budget Policy Statement, the government maintains that the country’s public debt is currently still sustainable, but outlines the following measures it will take to maintain this:

These measures, if implemented, will serve to reduce the public debt levels while boosting economic growth. However, international organizations still remain skeptical with forecasts indicating that public debt could shoot past 60.0% of GDP by June 2018, especially with the expected March 10-year Eurobond issue.

Should we be concerned?

From the case studies, we note some similarities between the public debt scenarios of the two countries (Ghana and Mozambique) and Kenya as explained below:

To answer the question as to whether we should be concerned, we have put together a table of metrics, indicating the level of concern based on the current and projected situation.

Of the 5 metrics we have taken into account, 3 suggest High concern while 2 suggest Medium concern bringing our conclusion to: Yes, we should be concerned about the country’s debt levels “Unless decisive policies are implemented by the government.”, as Moody’s would put it.

Suggestions for such decisive policies include:

Disclaimer: The views expressed in this publication, are those of the writers where particulars are not warranted. This publication, which is in compliance with Section 2 of the Capital Markets Authority Act Cap 485A, is meant for general information only, and is not a warranty, representation, advice or solicitation of any nature. Readers are advised in all circumstances to seek the advice of a registered investment advisor.